Barcelona underwent a major transformation during the 1980s and ’90s, due in part to the 1992 Olympics. As a student there during that time, Gonzalo Milá bore witness to this makeover. The changes didn’t fail to influence Milá, who designed a bench, trash can, and streetlamp for his graduation project. After he submitted the streetlamp design to Santa & Cole, the company turned to him to create lamps for the science museum in Alcobendas, Spain, which was then nearing completion. The museum had two requirements: “They had to be versatile and couldn’t have been used anywhere else before,” says Milá. “And we only had six months to produce them.” In record time, Milá designed the Rama, a “tree” of light that reduced energy consumption and had an optional number of lamps that could be fitted at different heights and positions. “The key element was the luminaire’s case, which doubles as an arm,” says Milá. “Once I figured out what its proportions needed to be, it could be reduced to three parts: the pole, the luminaire and the clamp. This meant a simple life cycle, from production to maintenance, but also guaranteed the formal effect I was looking for.” In 2012 Santa & Cole launched its LED version of Rama, which allows for high efficiency and adjustable light intensity. Here, Milá discusses the lamp post’s design evolution. 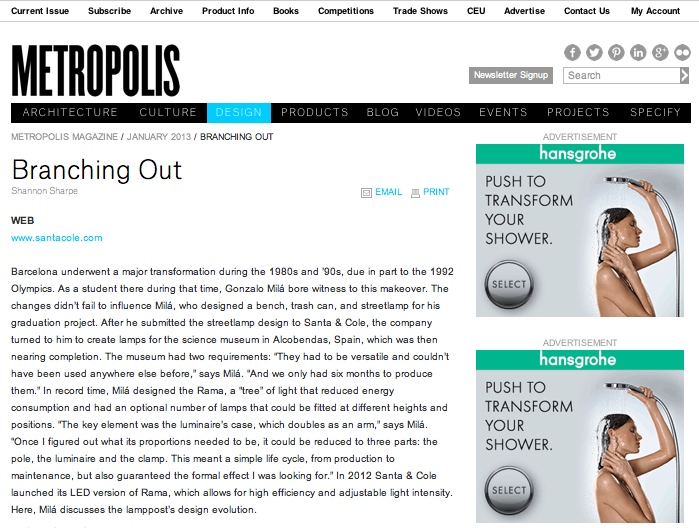